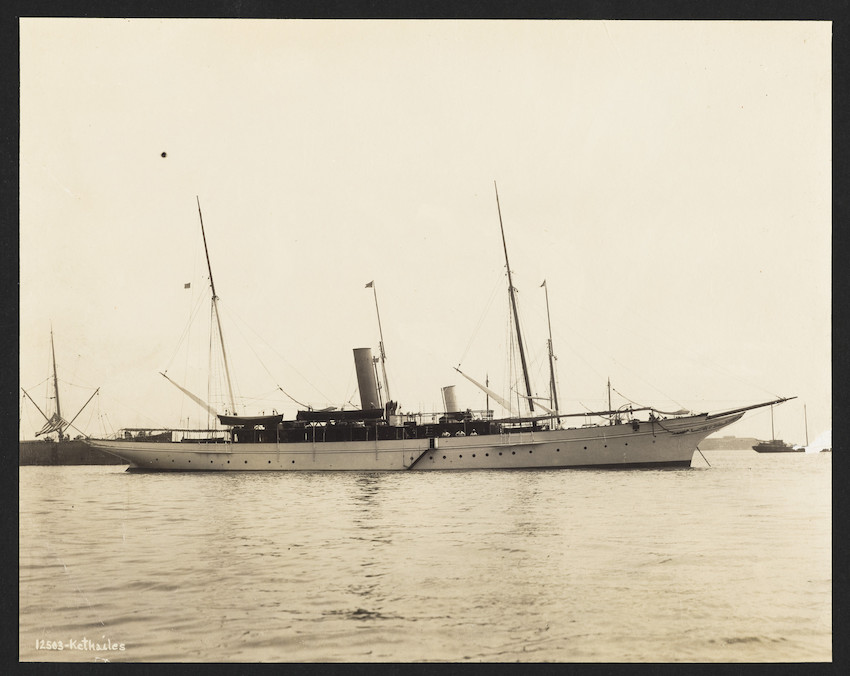 The Yacht KETHAILES was built in 1896 by Ramage & Ferguson in Leith for William Johnston (1841 - 1917).  Johnston was a successful Northern Irish ship owner who, in 1863, had founded the Johnston Line of Liverpool (later part of Furness Withy).

The yacht was named for his four daughters Kathleen (oldest), ETHel, AILeen and EStele (youngest) and was the first of three yachts of that name to be owned by Johnston.

In 1902, the yacht was sold to Col C L F Robinson and (aptly) renamed WANDERER.  Robinson was a keen yachtsman and adventurer and, having sensibly fitted WANDERER with a decent American fridge ("an excellent Hall & Co.'s cold storage plant,"), embarked on journey of 30,000 miles that would take him through the West Indies, Central America, Europe and ultimately to Scotland.  Highlights of the voyage were recounted in a slim volume entitled Thirty Thousand Miles in the Wanderer.

Col Robinson was the president of the Colt Firearms Company (having married into the Colt family) and was a keen supporter of rowing at his alma mater, Yale.  After his extended cruise, Col Robinson evidently threw himself back into his work and later, as the Great War brought increased demand for arms, the pressures of work took their toll:  he died aboard his schooner Savarona (not to be confused with the motor yacht JAMESTOWN ex Savarona), apparently from overwork.

Some sources state that Kethailes was actually purchased from William Johnston by H A C Taylor of New York, but it seems more likely that Taylor - the heir to banking magnate Moses Taylor - acquired the yacht from Robinson at some point before 1907, when the New York Times reported that H A C Taylor's WANDERER was in Kiel for the Kaiser's yachting week (at which the Kaiser's own yacht, Meteor was wrecked).

The U.S. Navy acquired WANDERER from Taylor on 10 June 1917 for as a Special Patrol boat to provide convoy escort and to fight U-boats (see also REMLIK).  Designated SP-132, she was commisioned USS WANDERER in New York on 14 July 1917 with Lieutenant Pierre L. Wilson in command.

Like REMLIK, USS WANDERER was desptched to Brest assigned to antisubmarine patrol and coastal convoy escort duties along the north Bay of Biscay coast.