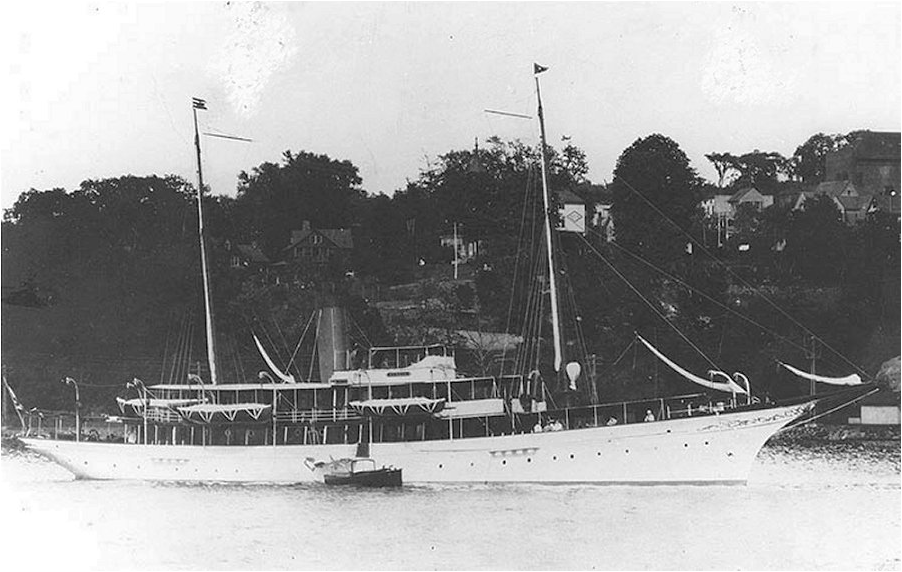 The luxury yacht CANDACE was built by Cook, Welton and Gemmell in Hull, England in 1903.  So far as I can tell, she was built for Walter S Bailey who, together with his brother William Bailey, were partners in the Bailey & Leetham Shipping Line with William Leetham.  Bailey and & Leetham was the second largest shipping line in Hull - perhaps an underwhelming accolade - but a significant concern in any event with some 23 ships plying various routes from St Petersburg to Cape Town.

In 1903 the Bailey & Leetham line was acquired by Thomas Wilson & Sons and I surmise that Walter Bailey, a keen yachtsman and, apparently, commodore of the Royal Yorkshire Yacht Squadron purchased CANDACE with the proceeds of that sale.

Four years later, in 1907, CANDACE was bought by Willis Sharpe Kilmer and renamed - in common with virtually everything that Kilmer acquired - REMLIK (which is Kilmer backwards).  Willis Kilmer was an American who had made a spectacular fortune selling the patent medicine known as Kilmer's Swamp Root - a concoction of dubious medicinal efficacy developed by Kilmer's uncle, Dr. S. Andral Kilmer, which Willis Kilmer appears to have stolen.

Willis Sharpe Kilmer was an almost cartoonish tycoon with wildly extravagant tastes in houses, yachts, race horses and even a private railway carriage (also named Remlik).  By virtually all accounts he was boorish, uncouth, overbearing and ruthless and known, by his own admission, as the most despised man in America.

By 1917, the United States had entered the Great War and found itself desperately short of fighting ships to take on the German U-boat menace.  REMLIK was one of a number of luxury yachts to be requisitioned and converted into "Special Patrol" boats. the USS Remlik (SP 157) was commissioned in July 1917, armed with Sperry depth charges, two 3-inch guns and two machine guns and despatched to Brest to patrol the Bay of Biscay and escort convoys.

Some 18 months later while on patrol in some dirty winter weather typical of Biscay, The REMLIK's crew sighted a submarine, which submerged before REMLIK's guns could be brought to bear.  The ship was only making around 2 knots against a high winds and heavy seas- too slow to deploy depth charges safely and get away - but she attempted to hold station in hopes that the submarine might re-surface.  A periscope was sighted on three occasions but the u-boat remained stubbornly submerged.  Just after the last sighting, REMLIK was struggling to manoeuvre, when her depth charge cradle was washed overboard, leaving the depth charge itself a liberty to roll crazily about the after-deck, with the safety pin gone.

On the bridge, Chief Boatswain's Mate John Mackenzie was alive to the imminent danger presented to the ship and her crew by 300 pounds on TNT on the hoof on a pitching deck.  Although the afterdecks were awash, he was somehow able to bring the canister under control, stand it on its end and re-insert the safety pin.  While he gamely sat astride the charge, REMLIK was brought up into the wind and his fellow crewmen were able at last to lash the canister to the taffrail.  Mackenzie was credited with saving his ship and crew and received the first Medal of Honor ever presented to a Navy reservist.